Universiade Is in Your Pocket. Slogan, Emblem and Mascot Are Officially Launched for the 31st Summer Universiade Chengdu 2021

The Summer Universiade, an international competition, is globally focused and an opportunity to upgrade the brands. 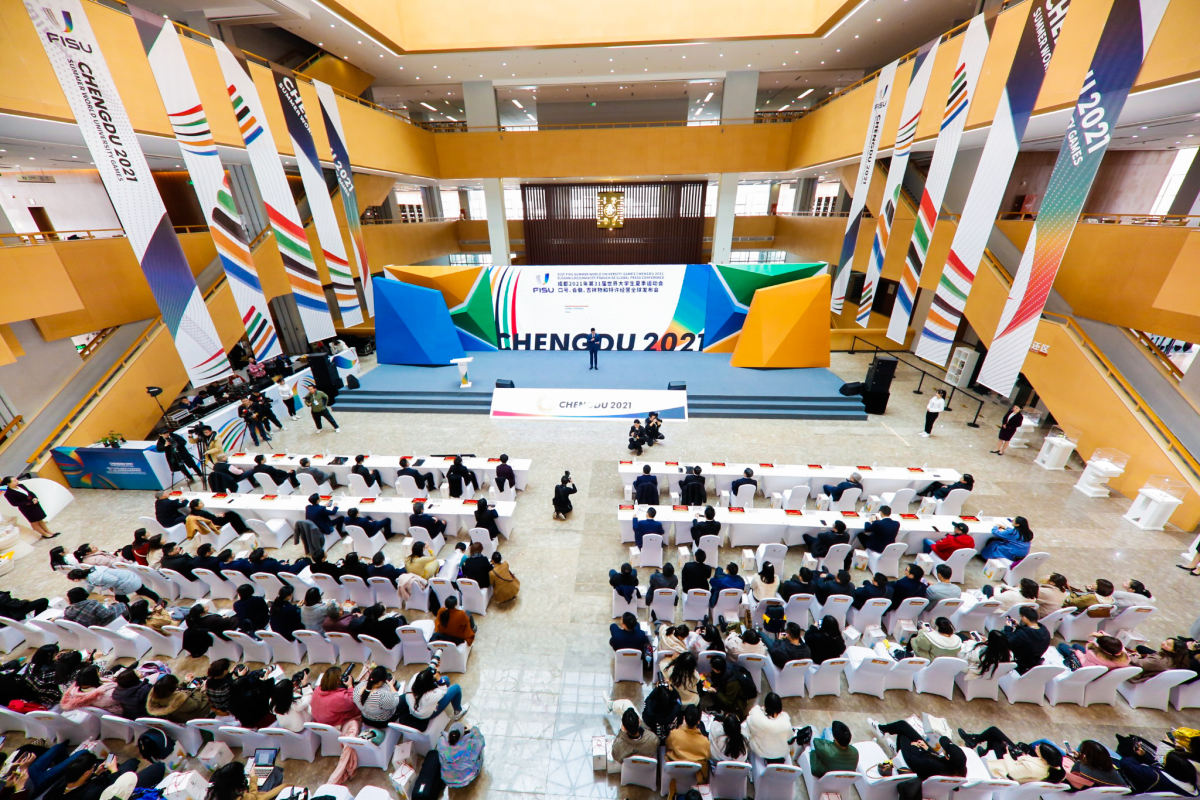 The Universiade is approaching
Slogan, Logo and Mascot make the stage poses

A good set of slogan, logo and mascot can not only add luster to the large-scale sport events, but also become the brightest business card for the host to show its competitive spirit and urban temperament.

At the press conference, the Chinese and English slogans of the Chengdu Universiade were officially released - the Chinese slogan was "在成都，成就每一个梦想。" and the corresponding English slogan is "Chengdu Makes Dreams Come True".

Mr.Zhou Xiaojun, the official advisor of 2008 Beijing Olympic Organizing Committee Official Consultant Unit, managing partner of Ogilvy & Mather group in China, the member of Chengdu Universiade Assessment Committee of Slogan, Logo and Mascot, explained and interpreted the connotations and significance of the slogan, logo and mascot of Chengdu Universiade. He introduced that the main body of the Universiade logo was designed based on the initial English letter of Universiade - "U", and in combination with the solar divine bird which is one of the symbolic elements of Chengdu culture. The logo comes in a scheme of four gradual color: oriental red, bright yellow, emerald green and lake blue. It corresponds to the vitality, wisdom, greenness and sharing concept of the Chengdu Universiade and is consistent with the logo elements of the International University Sports Federation.

The mascot of Chengdu Universiade is a giant panda named "Rongbao". In addition to the torch with "31"pattern in Rongbao's hand, Rongbao's ears, eyes and tail also present a flame outline. In Zhou Xiaojun's view, "the slogan, logo and mascot of the Universiade are rich in aesthetic concepts, which convey Chengdu's determination to make the Universiade a great success and its desire to build a famous sports city."

The launch of slogan, logo and mascot means that the Universiade is approaching. A member of the Graphic Arts Committee of China Artists Association, now President of Sichuan Graphic Designers Association, Chen Xiaolin has said, "When the global guests stepping into Chengdu, they can feel the city's vitality and the Universiade spirit of Chengdu after seeing the slogan, logo and mascot."

Journalists learned that the selection of the slogan, logo and mascot took more than three months. The committee received over 7,000 slogans, nearly 2,000 logos and almost 1,000 mascots designing sketches from all over the world. The results was formally determined only after the preliminary and final evaluation work from the evaluation committee of the Preparatory Committee, the whole network voting and liking, the professional check and optimization design of experts. Therefore, each process embodies "Chengdu Flavor" and "Tianfu Culture". 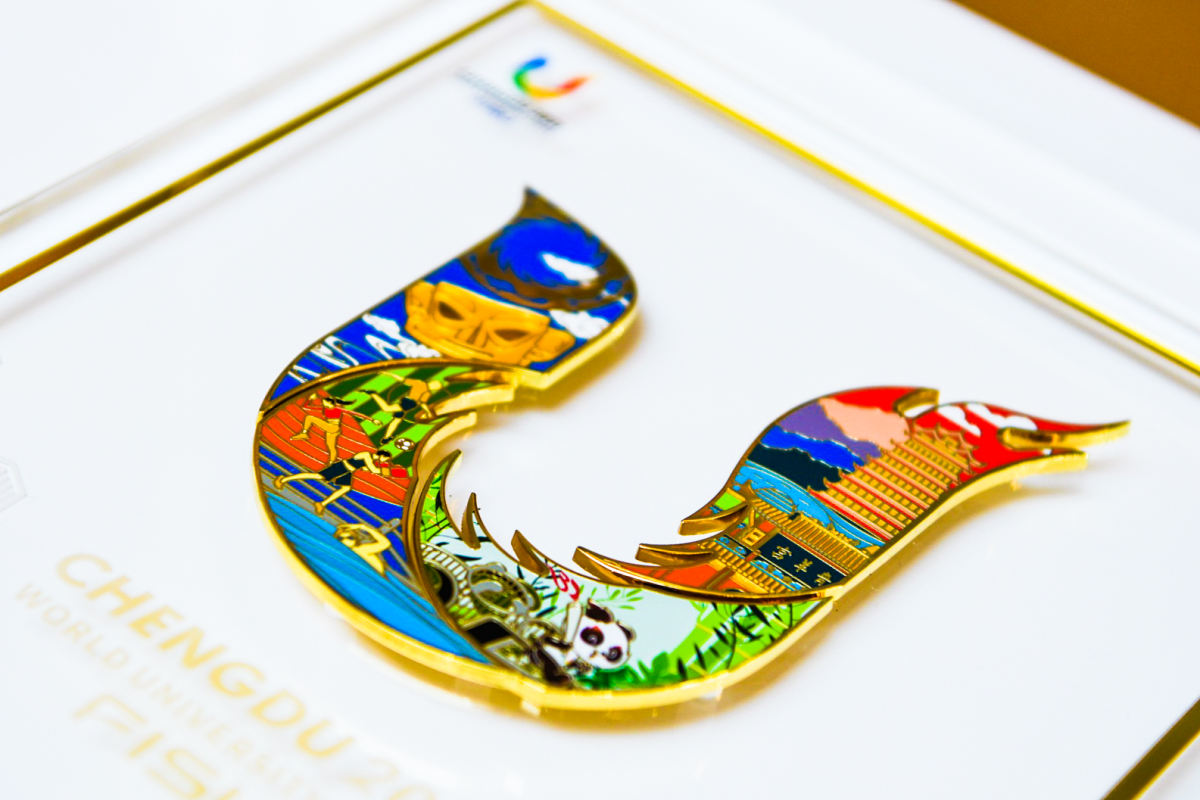 Meanwhile, the "phoenix", a characteristic element of traditional Chinese culture, is also cleverly integrated into the logo design. On the left side of the logo, the "phoenix head" is abstracted by the way of arc cutting and on the right side, the "phoenix tail" is abstracted by integrating flame elements, depicting a vivid and hovering auspicious bird in the sky. Phoenix not only represents the tenacity of Rebirth and Nirvana, but also signifies the hope to realize dreams, which perfectly coincides with the slogan of the Universiade "Chengdu Makes Dreams Come True", giving the best wishes from China to the whole world.

Similar to the logo, the mascot "Rongbao" of the Universiade, which gathers much attention, is also created with panda as the prototype, and has a distinct "Chengdu Style".

Known as the "national treasure", the panda is a unique publicity logo of Chengdu, and also a unique business card of the Land of Abundance. It is reported that Rongbao's facial design refers to the concept of the traditional art - face style of the Sichuan Opera. Therefore it is another innovative embodiment of Sichuan Opera, a Chinese intangible cultural heritage which keeps pace with the era. Rongbao’s ears, eyes and tail are all in the form of flame, with rich connotations and implications.

The world-class event is sure to attract global attention. The dissemination of the Universiade is supported by the major mainstream media in the world. In combination with the network media, the Universiade is promoted in the form of multi-channel, multi-platform, multi-media, three-dimensional and full coverage. It is estimated that the global dissemination will cover over 170 countries, with the amount of attention expected to exceed 800 million people.

Not only in communication channels circle, the Chengdu 2021 Universiade is attracting more "masters" and "cross-border giant" from commercial, literary and art circles to join.

On June 26 this year, the Chengdu Universiade 2021 Marketing Programme Global Launch was held. Jane Zhang became the representative of the image ambassador of Chengdu Universiade 2021. In Zhang’s opinion, the Universiade is a sports event inheriting the never-give-up and staying-vibrant spirits of youth. The Universiade has well demonstrated the knowledge, skills, strong physique and noble morality, which are essential qualities for the growth of young people.

As an important window for a country, region and city to show the development results to the world, the Universiade has world-class influence and attraction.

Today, Timmy Xu, a famous actor and singer, was hired as the image spokesman of the logo and mascot of the Chengdu Universiade. At the scene, he received the letter of appointment and unveiled the mascot.

This is a "value relevance" cooperation. Timmy Xu is the "National Snow Sports Promotion Ambassador" appointed by Beijing 2022 Winter Olympics. He attended and presided over the 1000-day-countdown for the theme concert of the Beijing Winter Olympics. The joining of Timmy Xu will bring the mascot a higher popularity and promotion. In the view of the insiders, Timmy Xu loves sports and has a healthy image. He was selected into the "the Sea of the Stars" youth actor program of Golden Rooster Film Festival. His youth energy and vitality are consistent with the image of the Universiade, and his spirit of constantly overcoming cross-border challenges in the field of music and performance is consistent with the connotation of seeking breakthroughs and pursuing excellence in the Universiade. The participation of these celebrities shows that Chengdu Universiade has strong brand attraction. The cooperation between star events and celebrities will make more and more people feel the charm of the Universiade."

“Universiade is in your pocket”
100 licensed products are on sale worldwide!

On the same day, the Chengdu Universiade officially released the franchising plan, and more than 100 franchised commodities covering various categories with Tianfu Cultural characteristics were launched. A wide range of franchised commodities are not only "cultural", but also environmentally friendly and practical with more "international style"! The Chengdu Universiade franchising will cooperate with super first-line brands for the next step, internationally renowned artists and designers to create special products. The leading enterprises in artificial intelligence at home and abroad will research and develop a series of intelligent franchised products, and will fully combine the main lottery of the Universiade to launch a series of interesting products. It is expected that more than 1000 new franchised products will be sold in the global market in the future. This is an important step in the brand management strategy of the Chengdu Universiade.

21 pure gold, 105 pure silver and 1,895 pure copper limited edition badges were sealed in 2021 unified packing boxes for sale at random. One of them could be taken away for only 100 yuan. The market price of the 3-gram pure gold badge is 1,699 yuan, while the 8-gram pure silver badge is 399 yuan. Even if you buy a pure copper badge, the elaborate design and production contained in the badge, as well as the unique value and commemorative significance given to it by the Chengdu Universiade 2021, can not be lower than 100 yuan!

The licensed commodity retail of the Universiade is divided into online and offline parts, which radiates the major cities and overseas regions and countries. The online official flagship stores of the Universiade are open, with authoritative release and full category sales, and serve as the first retail channel for "New Products for Universiade" activities; while in the physical stores, there will be no less than 100 retail stores, covering Chengdu’s mainstream business districts, hot spots and transportation points, such as Wuhou Temple Jinli store, theme park store etc., and it is coming soon.

In Chengdu, the atmosphere of the Universiade is getting stronger and stronger.

On December 27, the non-first section of Phase I and Phase II of the Metro Line 5, the Phase II of Metro Line 10 and Tram Line Rong 2 were officially opened for operation, realizing the "simultaneous launch of three transportation lines". One of the highlights is that the first train of Chengdu Metro Line 5 "Universiade" drives out of Yuanhua depot. Chengdu Metro Line 5 Phase I and Phase II has the longest length, the longest train and the largest passenger capacity in the metro history of Chengdu. The subway with large passenger flow density, strong mobility and diverse receiving groups is undoubtedly the best platform to spread Chengdu sports aesthetics and create "welcoming the Universiade and enjoying sports beauty". With this in mind, Chengdu has created the "Universiade" train.

What does the "Universiade" themed train look like? This train with the theme of "Chengdu Makes Dreams Come True" is dominated by four colors: red, yellow, blue and green. It is clear that the carriage is in the outline of the classic U-shaped symbol of the Universiade. It is decorated with the "city tree of Chengdu" - ginkgo biloba, and shows sports such as gymnastics and diving of the Universiade in the form of abstract paintings. 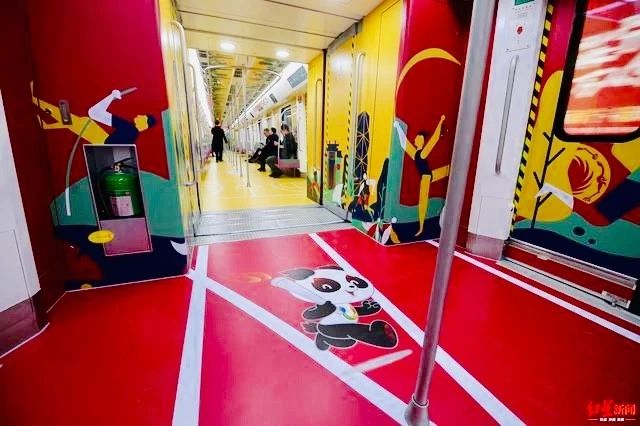 In the meantime, the train art design is integrated with the elements of traditional buildings in Chengdu, such as Jinli, Kuanzhaixiangzi Alley, Sichuan Radio and Television Tower, Global Center and other modern buildings as well as the elements of Tianfu Greenway.

Soon, the Chengdu Universiade 2021 will launch more projects and welcome more partners. As an international large-scale sport event, the Universiade can attract a large number of global audience. In 2021, more than 10,000 athletes and officials from about 170 countries and regions are expected to gather in Chengdu. The world-class event are bound to attract global attention and activate extensive media coverage.