Lin Li started learning swimming at the age of 7. When she was 9 years old, she began her training at the Youth Amateurs Training School in Jiangsu Province. Although the coaches in the school valued her, praising her as a talented swimmer with good flexibility and strong explosive power, and a diligent athlete that can bear the hardship of training, she was dismissed by higher-level coaches because of her short stature.

Once in a regional competition, Lin Li got a boil on her leg. Before the competition started, she went to her coach and said, "Please squeeze this boil for me!" The coach helped her squeeze out the pus and put a piece of tape on her leg. She immediately returned to the starting block. Zhang Xiong, a coach from the Jiangsu Provincial Swimming Team, was greatly moved by this story, regarding Lin Li as a persistent athlete and decided to cultivate her patiently. After that, Lin Li entered the Jiangsu Provincial Swimming Team with coach Zhang Xiong.

Under the guidance of coach Zhang Xiong, Lin Li's swimming skills improved rapidly. In November 1987, at the Sixth National Games of the People's Republic of China, Lin Li, who had just turned 17, broke the Asian record for the women's 200-meter individual medley. At that time, Zhang Xiong's reputation also greatly increased because he had trained such an excellent swimmer. After the National Games, Zhang Xiong and Lin Li both joined the National Team. At the Seoul Olympics in 1988, to the world's great surprise, she won the silver medal for the women's 200-meter medley, which established her position in the national team. After that, she became one of the Five Golden Flowers in the Chinese swimming circle, along with Yang Wenyi, Zhuang Yong, Qian Hong, and Wang Xiaohong. However, it was at the 1990 Asian Games in Beijing that she really caught the world's attention. At the Beijing Asian Games, she won a total of 3 gold medals in the 200-meter women's individual medley, the 400-meter women's individual medley, and the 200-meter breaststroke. The "Five Golden Flowers" in the Chinese National Swimming Team, Who Created the Most Splendid Era

On the evening of July 30, 1992, Lin Li finally realized her dream at the Barcelona Olympic Games in Spain and reached the peak of her athletic career with a gold medal she won for the 200-meter medley. She became the first Chinese athlete to break a world record at the Olympics. In addition, she also won the gold medals in the 400-meter medley and women's 200-meter breaststroke at the Games, making her the Chinese swimmer who won the most medals at the Olympic Games at that time. 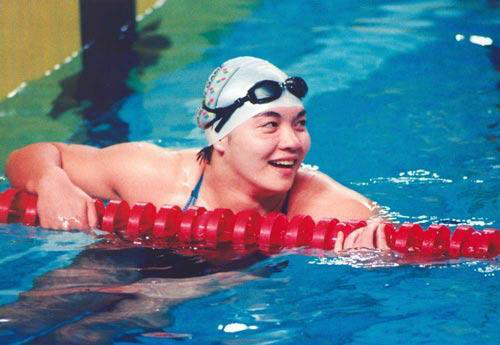 Lin Li in the Swimming Pool

"I feel that I have done my best in my swimming career. I have participated in three Olympic Games in a row and I made it to the finals in all three times. I've won gold, silver and bronze medals. For me, I'm very satisfied with my experiences." Lin Li said in a post-match interview, "Although the last Olympics was not perfect for me, I believe that imperfections are also parts of life. Sometimes perfect things are not as memorable as the imperfect ones. "