The traditional Chinese calendar divides a year into 24 solar terms. One of these is Lidong, which means the prelude to winter and marks the point after which temperature gradually declines. In northern China, it is the first month of winter when "water becomes ice and the ground freezes". Many places in China put on events to welcome and celebrate the coming of winter. In the city of Harbin in Heilongjiang province, for instance, a number of sports enthusiasts love to welcome the coming of winter by going swimming.

Heilongjiang, which is located at the hinterlands of the Northeast Plain and the south of the Greater Khingan Range, is the northernmost province in China. In late autumn each year, the cold current from Siberia roars in, making Heilongjiang one of the earliest parts of China to step into winter. As the provincial capital, Harbin is naturally seen as the center of cold and is colloquially known as the "Ice City".

(Photo by Erica Li on Unsplash)

A unique and richly diverse history has left its mark on the city in the form of various Western-style buildings which feature architectural styles such as Baroque and Byzantine. In winter, Harbin transforms into a colorful ice city, with a unique kind of scenery adorning its many streets and lanes—ice sculptures. Under the night sky, Harbin is gorgeous, beautifully illuminated by ice lanterns.

In recent years, the city's most alluring and attractive event each year has been the "Ice and Snow World", part of the Harbin International Ice and Snow Sculpture Festival. The event features a new theme every year. Here you can enjoy the world's tallest, longest and largest ice and snow landscape and ice sculptures in the shape of iconic buildings, as well as watch European-style singing and dancing performances. There are also a variety of ice sports to experience. At night, when the colorful lights in and around the ice are lit, it is like being in a fairy tale world made of ice and snow. All of this can only be experienced from December to February every year. Harbin, a famed winter sports city, has a memorable history with the World University Games. In 2009, the 24th Winter Universiade (the old name of the Games) was held here. 2,366 athletes from 44 countries and regions took part, making it one of the largest Winter World University Games. Correspondingly, in terms of media and volunteers participating, the event also set new records in both number and scale. The torch-lighting ceremonies in the opening ceremonies of large-scale sports games have always been one of the most anticipated parts. The moment when the torch was lit at the 24th Harbin Winter Universiade was so impressive that it received long-lasting praise from people. After the delivery of the first three relays, the last torchbearers, Zhang Dan and Zhang Hao, the world champions of figure skating, took the torch and ran to the torch site where it would set the torch alight. Then the fireworks burned, forming the number "24" to signify the 24th Winter Universiade. Then the "24 rockets" composed of stunt fireworks suddenly rushed to the tinder snowball. When the snowball was ignited, Wangzi, a member of the Chinese men's curling team, threw a curling stone towards the snowball to get it rolling. The snowball rushed towards the main torch tower along a cable wire after being hit by the curling stone, and then the bottom of the brazier was ignited by the snowball. The fire climbed up step by step and formed a flame in the shape of five rings before reaching the main torch tower. The torch then burst into an impressive blaze. It was an incredible spectacle.

As the flames raged, the curtain was drawn back on the Winter Universiade with the theme of "Youth, Future, Ice and Snow". This marked the second time that China had hosted the World Universiade, with the first being the 2001 Beijing Summer Universiade, and it was also the first time that China had hosted a comprehensive world-class winter sports event. Facing the various challenges of hosting such an event, the people of Harbin showed their efforts to the world and presented a perfect Winter Universiade in history. 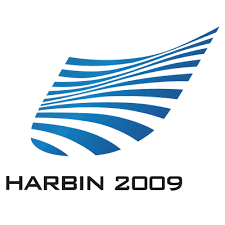