It’s safe to say Simonay Weitsz’s luggage weighed a lot more on her return home to South Africa following last month’s Federation of Africa University Sports (FASU) Games in Kenya. The middle-distance runner enjoyed a stellar competition as she bagged three golds and a silver in the continental championships. The Tshwane University of Technology first year sport management student took up running after being distracted by cross country athletes jogging past her netball practice in primary school. She was one of 1450 student-athletes from 48 universities and 14 different countries present at Kenyatta University for this year’s five-day event, postponed from 2020 following the breakout of the global pandemic.

The 23-year-old admits competing in Kenya was a last minute decision, but her regular training put her in good stead, as she jumped at the opportunity to represent her university for the first time abroad.

“This was my first time competing internationally for my university,” she tells FISU.net. “The level of competition was at a good level for this time of the year and for us as student-athletes. I like strong competition as that makes the event interesting and it makes you give your all and bring everything out of you in that event.” 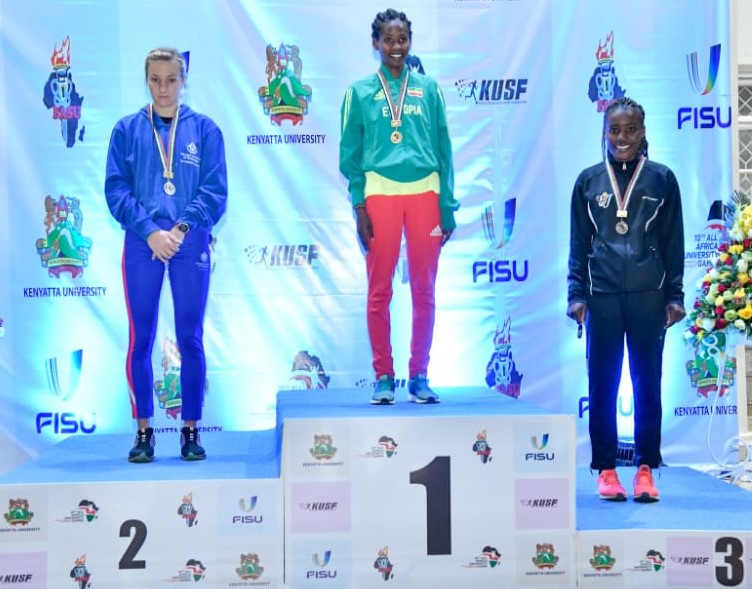 Give it her all Weitsz did, bagging silver in her favoured 1500m event, and standing atop the podium on three separate occasions after winning the 800m final and being part of the victorious 4x400m and 4x100m relay teams. Over and above her achievement, the talented runner said she was just glad to be back racing after COVID-19’s effect on the university competition calendar.

“It was really great to be back to racing after almost two years of no racing and no competitions,” she says. “It was so nice to be able to wear my university kit and race in it again.” Next up for Simonay is the South African 10km Championships as well as the National Cross Country Championships in August and September. Yet, she admits she already has her eyes set on an event a little further into the future, the Chengdu 2021 FISU World University Games, which will take place in the summer of 2023.

“The FISU World [University] Games was definitely in my planning and preparations for this year, and I was looking forward to racing at such a big competition for my university and my country,” she says. “I was a bit disappointed when they announced that the event has been postponed to next year, but on the other hand I’m grateful as I have now more time to better prepare, get into a better shape than this year and work on my weaknesses. I think I will have a better chance of doing well at the World [University] Games next year than if they took place this year.”

With a taste for medals now acquired at university level on the continent, Simonay will definitely prepare herself for a podium finish on the international stage in China next year.