When will the Chengdu 2021 FISU World University Games take place? Who can participate in the Chengdu 2021 FISU Games?

1. Nationals of the country or region they represent.

2. Students who are currently officially enrolled in a degree or diploma programme at a university or college, and whose status is recognised by the relevant institutions in their countryor region. 269 gold medals will be handed out at the Chengdu 2021 FISU Games, with a maximum of 50 gold medals to be claimed in a single day. Athletics will produce the most gold medals, and it has been one of the compulsory sports since the very beginning of the Summer World University Games. The Chengdu 2021 FISU Games’ slogan is “Chengdu Makes Dreams Come True”, and the concept is sustainable, smart, spirited and sharing. The main body of the emblem was designed based on the initial English letter of Universiade—"U", and in combination with the Golden Sun Bird which is one of the symbolic elements of Chengdu culture. The emblem comes in a scheme of four gradual colours: oriental red, bright yellow, emerald green and lake blue. It corresponds to the sustainable, smart, spirited and sharing concept of the Chengdu 2021 FISU Games and is consistent with the FISU emblem elements.

The mascot of the Chengdu 2021 FISU Games is a cartoon giant panda named "Rongbao". It was inspired by Sichuan Opera makeup. In addition to the torch with "31" pattern in Rongbao's hand, Rongbao's ears, eyes, and tail also present a flame pattern.

Panda Zhi Ma won the champion and became the real "Rongbao" in the global contest "Choosing a Real Rongbao". Many people think 3-year-old Zhi Ma appears really like the cartoon image of "Rongbao". During the contest, fans and panda lovers voted enthusiastically for the "Rongbao" in their heart. The Chengdu 2021 FISU Games torch "Rong Huo" (meaning the Chengdu Flame) uses Chengdu's nickname "Rong" and can be interpreted as "harmony" in the Chengdu dialect.

The front of the torch features the globally recognised IP and Sichuan's "living fossil"—the Giant Panda and embodies a culture of passion, optimism, and inclusiveness. The top of the torch features Chengdu's city logo and the symbol of Chinese cultural heritage—the Golden Sun Bird, which soars through flames in unwavering pursuit of the light. The torch's silhouette resembles the Bronze Standing Figure from the Sanxingdui Ruins Site and pays homage to the ancient Shu civilization. The mesh near the top takes the shape of bamboo leaves, which also serves to complement the Panda design.

The select elements from the Chinese culture, combined with innovative designs and engineering techniques, lend the torch stylish elegance and enduring class. With the Chengdu 2021 FISU Games emblem as the base, the design uses gradient strips to show upbeat, fashionable, and colourful life in Chengdu and the vibrant youth of college students. It also showcases a sustainable, smart, spirited, and sharing concept of the Chengdu 2021 FISU Games. Representative elements and iconic buildings of the city in the background epitomise the unique charm of this ancient city, revealing its humanistic spirit forged by thousands of years of culture and history. 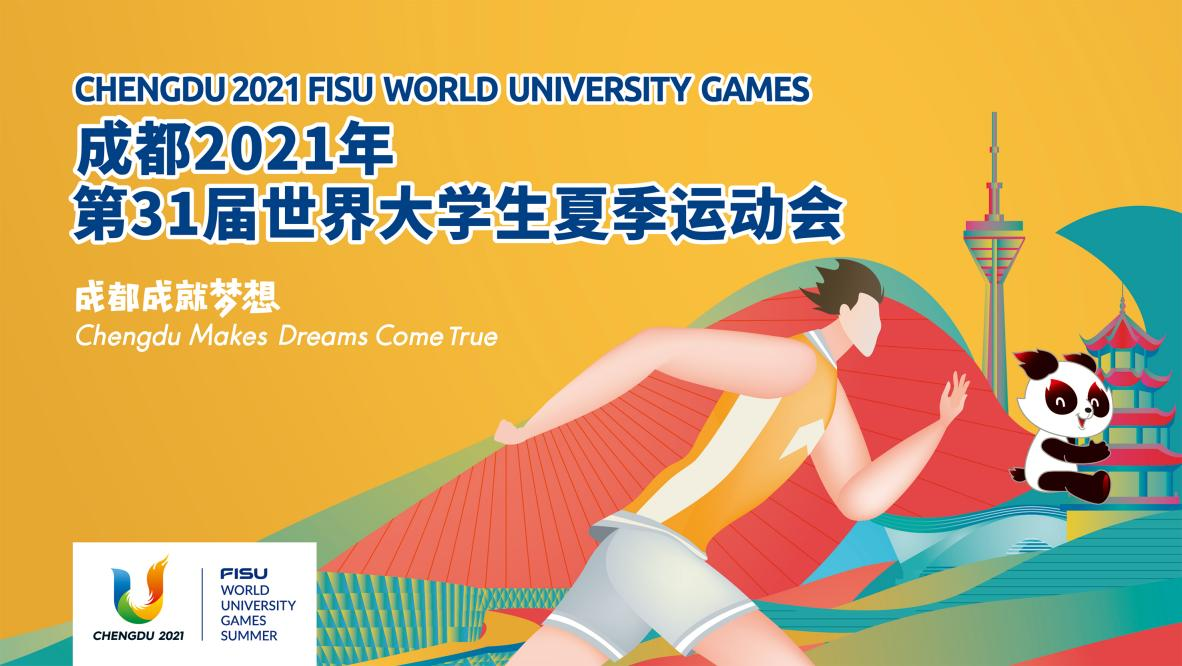 The Chengdu 2021 FISU Games Village is located in Chengdu University. The Village will provide accommodation, transportation, and other living services for more than 11,000 delegate members from over 170 countries and regions. It is equipped with facilities such as medical centres, service centres, fitness centres, training halls, and commercial streets, which can provide a safe and comfortable environment for athletes and other delegates. Staying here will be an enjoyable experience.

See more: The Construction of the Chengdu 2021 FISU Games Village Located in the Dong'an Lake area in Longquanyi District, eastern Chengdu, Dong'an Lake Sports Park is a comprehensive sports and entertainment industrial base which can hold large-scale sports events and national top-level artistic performances, and also serves as a training venue for sports activities.

Dong'an Lake Sports Park consists of one stadium and three indoor gymnasiums, namely a large top-level stadium with a capacity of 40,000 people, a large multi-purpose gymnasium with 18,000 seats, a multi-ball games gymnasium, and a large aquatics centre. Besides, the park is covered with scattered landscape vegetation as well as equipped with outdoor parking lots and numerous auxiliary facilities. It's the place to host the grand opening ceremony of the Chengdu 2021 FISU World University Games. It will also be a venue for artistic gymnastics and swimming.

On the morning of 26 June 2021, this Park was named as World University Games Park by FISU.

See more detials about the venues and the World University Games Park. 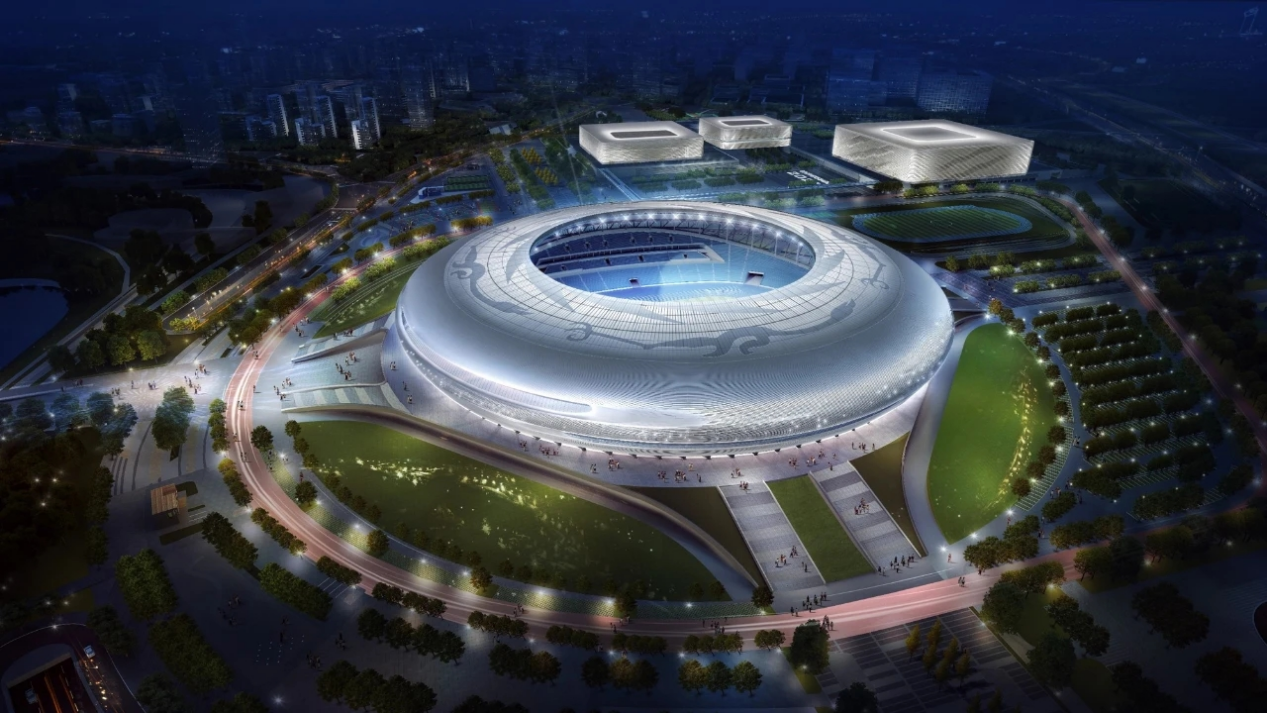 Fenghuangshan Sports Park Gymnasium is located in Jinniu District, Chengdu City, only about 12 kilometres away from the downtown city. It is a comprehensive gymnasium that has 18,000 seats (15,020 fixed seats and 3,022 movable seats). Its construction area is about 55,000 square metres. It can hold top-level indoor competitions of basketball, ice hockey, and other sports. The basketball court conforms to NBA standards and can be converted into an ice hockey court.

This gymnasium will serve as a competition venue for basketball during the Chengdu 2021 FISU World University Games. Technologies in the Chengdu 2021 FISU Games

A colour-painted aircraft is customised for the Chengdu 2021 FISU Games, featuring the Key Visual Design elements of the Games. It incorporates the emblem and the mascot "Rongbao". The main colours are picked from the emblem—bright red, brilliant yellow, emerald green, and lake blue respectively correspond to the concept of sustainable, smart, spirited, and sharing. Engineers mixed scores of colours for the spray-painting of the entire aircraft, among which 13 colours were used to paint the emblem on the fuselage. The Chengdu 2021 FISU Games AI satellite jointly developed by ADA space and the University of Electronic Science and Technology made its debut on 18 August, 2020. This is the world's first sporting event satellite and the first time that the AI satellite Internet has been fully integrated into a world-class comprehensive games. The Chengdu 2021 FISU Games themed subway train was officially unveiled on Chengdu Metro Line 2 on 15 August 2020. The design concept is derived from the Key Visual Design. The official website of the Chengdu 2021 FISU Games (2021Chengdu.com) was launched in April, 2019, and has been upgraded for times to facilitate more visitors. The Chengdu 2021 FISU Games countdown timer was unveiled for the first time at Chengdu Shuangliu International Airport on 30 April 2020. By the end of May, another eight countdown timers at various locations in Chengdu had been set, and they can be seen at Taikoo Li, Tianfu Square, FISU Games Village, Dong'an Lake, Tianfu Avenue, Shuangliu International Airport (T1 and T2), South Railway Station, and East Railway Station. The countdown timers have become new landmarks in Chengdu. 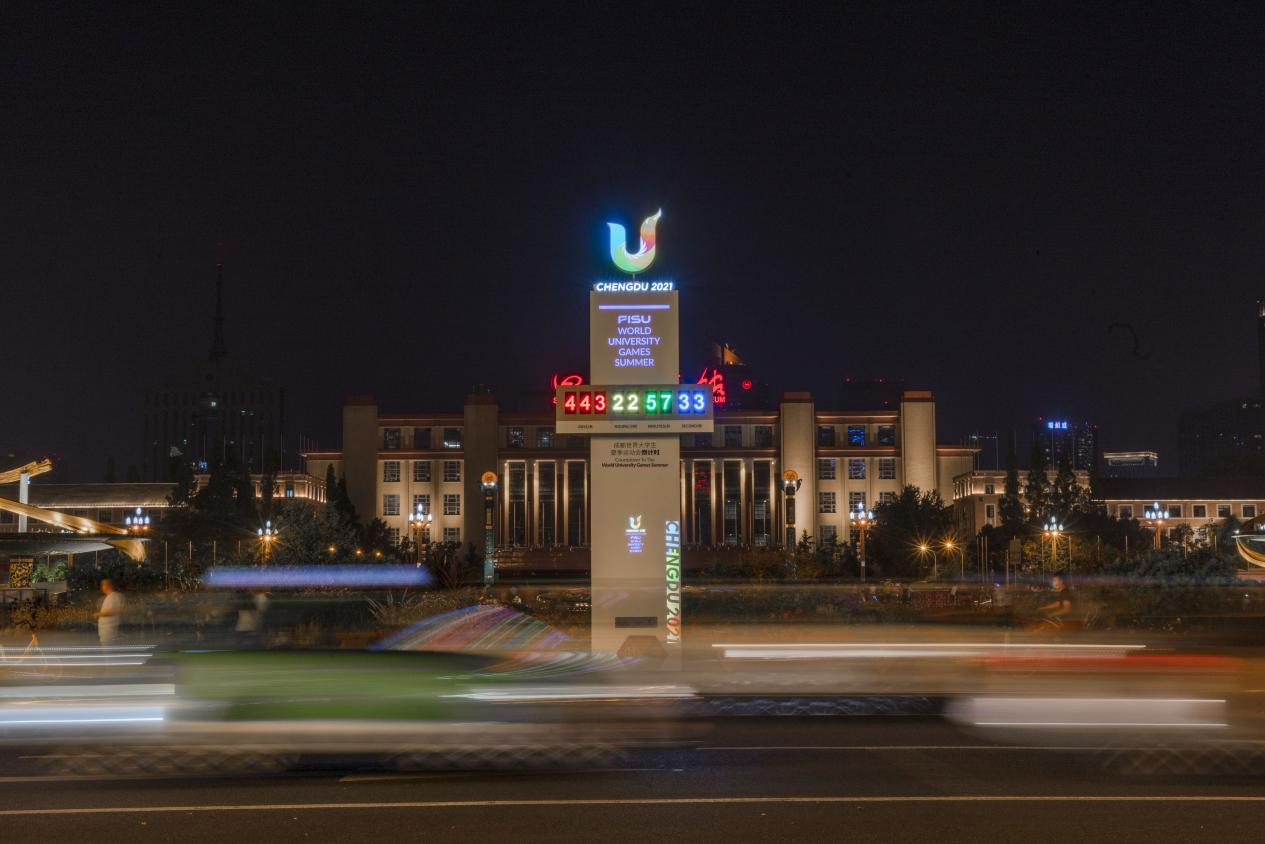